The Krider Performing Arts Center
2017 Festival of Trees presented by the Downtown Paris Association.  KPAC wanted to enter a tree, but we wanted to do something a bit ... different or out of the box, so to speak.  So we did a Gnome Tree.  We certainly got the award for which we were aiming!  Many thanks to our set designer, Jarrett Kinsland, who took the vision and made the gnome come to life, and thanks to Kimberly Kinsland for her help!
-- Rhonda Stanton, KPAC Manager 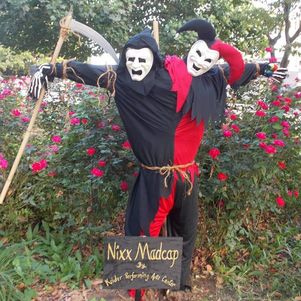 In the fall of 2017, the DPA once again presented "Scarecrows on the Square."  In trying to come up with an idea for our scarecrow, we were considering iconic arts-related images to go with the arts.  When the comedy and drama masks found in theatre came to mind so did another thought....TWO-HEADED SCARECROW!  So that's what we did ... and won Best of Show!

​Thanks to Jarrett Kinsland for construction, Rhonda Stanton for sewing, and Kimberly Kinsland for lettering our sign.
September 23 - Our KPAC Young Artists and KPAC Players groups
performed for the community at Arts 'Round The Square.
Below find pictures of our performers representing
RATS! The Story of the Pied Piper
KPAC Young Artists Chorus
Singin' In the Rain, Jr.,
& Breaking Up Is Hard To Do
shared their talents on a beautiful (and really warm) fall day!

July 21, 2017 - Our KPAC Young Artists Theatre presents a complimentary performance of
​"Singin' In The Rain, Jr." to approximately 80 children from PSSD Kids Clubs and
​to approximately  60 residents and staff from area assisted living facilities.

December 2016  -  KPAC Young Artists Chorus Christmas Caroling
at Eiffel Gardens Assisted Living, ​Morningside Assisted Living and Wesley Pine Ridge.
What a great meeting of generations as our youth reached out with some fun songs of the season!